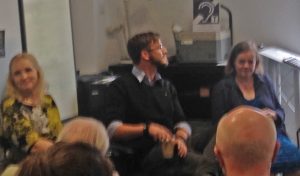 ‘The Measure of the Curtain: instigators, owners, sharers and players’, a talk by Dr Eva Griffith at the London Metropolitan Archives on 10 September, with Claudia Roncallo (Juliet and Nurse) and David Amelang (Romeo and Henry V). Part of the Drawing Shakespeare’s Curtain day.

The Curtain, when seen as a Field

“To cut a long story short, if one wished it, one could see all of early theatre history flourishing in this field…”

I am adding some extra notes to this, my morning talk of 10 September 2016, entitled ‘The Measure of the Curtain: instigators, owners, sharers and players’. This was given first session at ‘Drawing Shakespeare’s Curtain’ – an event in the Huntley Room at the London Metropolitan Archives – at 10.30am on that day. Many of the following items were listed in the presentation that went along with this talk, so it’s only right I should list them here, published as a set for the first time, concentrating on #ThatField in Shoreditch.

A few extra confirming details would include the fact that yes, William Middleton, Thomas Middleton’s father, was a City of London Bricklayer who owned property on the site. (Did he build the Curtain playhouse? A paper: ‘Bricklayers, playwrights and playing the field’ given at the Birkbeck Early Modern Society in October 2016 revealed more.)
The Thomas Wriothesley, earl of Southampton, who is listed among those having once been associated with the field, was the grandfather of Henry Wriothesley (Shakespeare’s patron), I believe.

There were other actors, theatre-builders and playwrights associated with this acreage in Shoreditch. Follow me on Twitter @EvaGriffith19 #ThatField.

This list is not exhaustive! Research is ongoing! Watch this space!

Previous Post
Eleanor Collins: A Jacobean Company and Its Playhouse
Next Post
Till the state fangs catch you – James Shirley the Catholic: Why it does not matter (and why it really does)