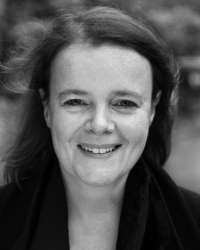 Eva Griffith was born in Knightsbridge, London in 1963. Her parents were both actors, having met in 1952 on an Old Vic tour to South Africa. This was in Tyrone Guthrie’s 1951 production of Shakespeare’s A Midsummer Night’s Dream. Her father, Kenneth Griffith, played Oberon, and her mother, Doria Noar, was Mustard Seed and the First Fairy.

Eva’s first home was the O’Toole family home in Hampstead, for the actor Peter O’Toole was a good friend of her father, Kenneth. It wasn’t long before Eva was an Islington baby, however. When Eva was small she wanted to be a dancer and studied  on Saturday mornings at The Ballet Rambert School in Notting Hill Gate. But by the age of seven she was auditioning for acting roles. Her first part was ‘Judith’, the daughter of characters played by Richard Burton and Elizabeth Taylor. This was in the two-part film Divorce His Divorce Hers. which was filmed in Rome and Munich in the early 1970s (Harlech Television, director Waris Hussein).

In 1974 she went to Australia to work on a Walt Disney film called Ride A Wild Pony which was based on Robert Aldridge’s A Sporting Proposition. Soon after her return she moved to live with her grandmother, Doris Noar, in St. Albans, Hertfordshire. She was not long into her teens, however, when she was acting again back in London, this time on the stage in a musical version of Hans Christian Anderson’s The Little Match Girl. The musical was called Scraps and was produced at The Orange Tree in Richmond in the days when it was a tiny theatre on the top of The Orange Tree Pub. In the cast, playing a prostitute, was the actress Sharman Macdonald, who later wrote the award-winning When I Was A Girl I Used To Scream and Shout and who was to give birth to the now stratospheric Keira Knightley. The famous song to come from this production was altered and produced as a Christmas hit by Cliff Richard: ‘Christmas Time, Mistletoe and Wine’.

Eva loved her school in London – More House – a Catholic private school for girls which she paid for with her own earnings. She enjoyed studying the Humanities, with Latin lessons an interest, and particularly liked original historical research extending outside the school curriculum. Acting again intervened, however, when she gained the part of Hedvig in Henrik Ibsen’s The Wild Duck directed by Val May at the Yvonne Arnaud Theatre, Guildford. This went on a national tour and was followed by a National Theatre production on the Olivier stage in a version by Christopher Hampton. Leading parts were played by Michael Bryant, Stephen Moore and Sir Ralph Richardson . (It was directed by Christopher Morahan and recorded in Peter Hall’s Diaries).

The Wild Duck seems to me the perfect balance of poetry and realism. It’s not performed much, because it is very demanding… with an important part for a fifteen-year-old girl. A girl called Eva Griffith played that part at the National… and she was really good. I don’t know what became of her.”
Christopher Hampton on Ibsen’s The Wild Duck at the National, from Hampton on Hampton ed. by Alistair Owen (London: Faber & Faber, 2005), p.43

Wednesday 16 January. Since I returned from America I have seen Uncle Vanya at Hampstead… the RSC’s Once in a Lifetime, brilliantly directed by Trevor; and Chris Morahan’s production of The Wild Duck in the Olivier… Michael Bryant as Gregers is wonderful, Ralph as old Ekdal is definitive, and Eva Griffith as Hedvig is very true and touching. I had a wonderful time.”
Peter Hall on The Wild Duck at the National, from Peter Hall’s Diaries: The Story of a Dramatic Battle ed. by John Goodwin (London: Hamish Hamilton, 1983), p.482

In 1991, with Eva expecting her son, John, she saw the opportunity to go back to study, making up for her lack of ‘A’ levels via the extra-mural classes given by Birkbeck College. With these she gained a Certificate and Diploma in English Literature, the key to her first degree. Thinking that at long last no director (of a few – not all) could ever make her feel stupid again, she enjoyed her degree at King’s College London with a relish, having every intention of returning to the stage once it was completed. After gaining her first degree, however, she found she had ‘caught the bug’ of scholarship and two others followed – an MA and then a PhD, both funded by the British Academy – both gained at King’s.