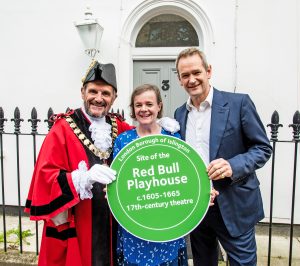 Deputy Mayor of Islington David Poyser and Alexander Armstrong with Dr Griffith at the unveiling of the plaque in Haywards Place on 29 August 2018.

Entertainer and broadcaster, Alexander Armstrong, together with his sons, Patrick and Rex, were there to unveil the plaque, along with David Poyser, Mayor of Islington and Dr. Griffith as academic boffin.

The event was preceded by a two-hour interactive exhibition in the Crypt of St. James’ Church, Clerkenwell, where many of the playwrights and players of the Red Bull were interred. Actors performed the parts of Thomas Heywood, John Webster, Susan Baskervile and Vittoria Corombona.
This exhibition included 6 banners part-funded by the British Shakespeare Association, along with photographed extracts from relevant Red Bull documents.
After the unveiling there was a party in the Crypt which included representatives from British and international academe and theatrical and historical societies related  to the occasion, along with members from the acting fraternity.
And a good time was had by all!
Previous Post
Andy Kesson on A Jacobean Company and Its Playhouse
Next Post
Transcriptions of Two Close Roll records (National Archives C54s) relating to the Curtain Playhouse (rough)