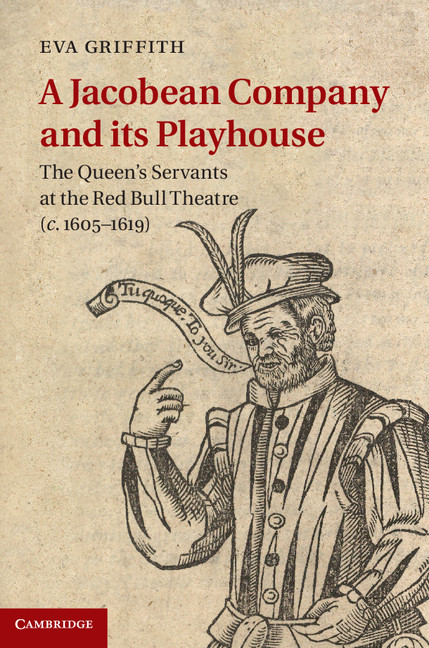 Imagine a playhouse – a rival to Shakespeare’s Globe – where spectacle could take precedence over words with fireworks, rich costumes, descending devils and ascending gods, song, battle, and special effect.

Imagine actors, like Will Kemp, John Duke and the entrepreneurial Christopher Beeston – once fellow actors with Shakespeare in his company – who chose to associate themselves with this other kind of entertainment over any other kind.

Imagine a company where extemporising clowns – Kemp, but also Thomas Greene (pictured on the cover) – earned their places in such entertainment, attracting the moneyed acclaim of the City’s crowds.

A Jacobean Company and Its Playhouse is a book crammed with detail about the Queen’s Servants at the Red Bull – a parallel company to Shakespeare’s at the Globe – a company that knew Shakespeare’s and collaborated with them. This is a history given for the first time, using over one hundred original documents from a host of locations – the National Archives, London Metropolitan Archives, the Guildhall, and the College of Arms, as well as other local archives in London, Kent, Suffolk and Norfolk repositories. The book builds up a picture of a set-up much like Shakespeare’s, while different in key areas. It is about a playhouse built on charitable land, owned by bureaucrats and held by a brewer’s daughter. It is a so-far missing history – a crucial piece to consider – for this oh-so important period for the English stage.

Previous Post
Short film about the Red Bull Playhouse
Next Post
Rebecca Bailey: A Jacobean Company and Its Playhouse